It's Flag Day Tomorrow - Are You Ready to Brush Up on Your Stars & Stripes Trivia? 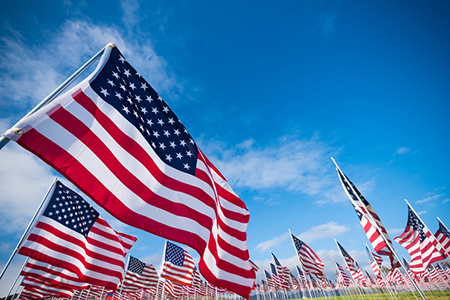 Never has a piece of decorated cloth inspired so much pride, patriotism, and even controversy, than our American Flag. Each year, the United States celebrates Flag Day on June 14. Here are some points of interest about this important day.

The history of Flag Day dates back to 1885, when according to USFlag.org, it is believed school teacher BJ Cigrand arranged for the pupils in the Fredonia, Wisconsin Public School, District 6, to observe the 108th anniversary of the official adoption of The Stars and Stripes as ‘Flag Birthday’ on June 14 of that year.

Flag Day – the anniversary of the Flag Resolution of 1777 – was officially established by the Proclamation of President Woodrow Wilson on May 30, 1916.

While Flag Day was celebrated in various communities for years after President Wilson’s proclamation, it was not until August 3, 1949, that President Truman signed an Act of Congress designating June 14th of each year as National Flag Day.

The careful treatment of our American Flag is a revered custom among generations of military veterans, patriots, and conscientious households that proudly display it. Whether you fly a flag at your home or business, or are ready to adopt that tradition on Flag Day 2017, the History Channel promotes a few interesting points to remember: